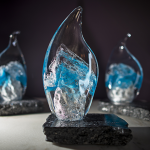 On Saturday, January 28, The Friends of the Saint Paul Public Library announced the finalists in nine categories for the 29th Annual Minnesota Book Awards.  Reviewed and chosen by 27 judges from around the state – writers, teachers, librarians, booksellers, and others from the literary community – the categories are:

Eligibility and process — Books created by writers, illustrators or book artists who are Minnesotans are eligible for Minnesota Book Awards. The Awards are given each year for books published in the previous year. For instance, the this selection of finalists were 2016 for consideration in 2017.

The Book Awards process begins with nominations, which are received from authors, publishers and others from throughout the state. From the nominated works, panels of preliminary round judges choose four finalists. Award winners are then selected by different, final round, judging panels.  Of note this year, 15 of the titles were published by Minnesota presses.

The 29th Annual Minnesota Book Awards ceremony will be held at the InterContinental Hotel in St. Paul on Saturday, April 8, 2017 at 6:30 p.m.  Seating is limited.  Make early reservations.