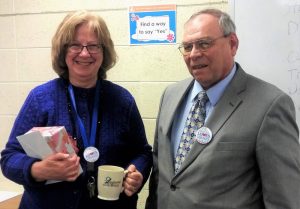 Isanti County Commissioner Mike Warring was right on the money when talking about Barbara Misselt during a special recognition of her retirement at this month’s East Central Regional Library Board of Directors meeting. “We always admired how Barb treats people, the staff and the board with respect,” he said.

That statement meant a lot to Barb because it reflects her philosophy — “We need to work together, even if we don’t always agree” – the same philosophy she put into action throughout the past nine years as director of Minnesota’s first regional library system. Overseeing a staff of 80-plus at 14 branch libraries and eight outreach sites, she strived to make sure people worked together across the east central region.

She also has full confidence in the new Executive Director, Carla Lydon, whose first day on the job is April 2, 2017.

“My career at ECRL has been fulfilling and enjoyable because of the professional staff team, at Headquarters and across the branches and the committed Board of Directors,” Barb said. “I am confident in the abilities of Assistant Director Carla Lydon who has been appointed to be the new ECRL Executive Director.”

For Barb, working with the counties and cities in the ECRL region, along with the state’s 11 other regional library systems, is important for the success of the library system. Such collaboration is done for the citizens of Minnesota, and so is advocacy, which recently brought Barb to the state Capitol to testify for Legacy funding. “One success helps others succeed,” she said.

Find a way to say “Yes” is not just a sign found at ECRL headquarters, it’s an expectation that Barb put on herself and staff in service to the public. The ECRL Board highlighted Barb’s adoption of this mindset, which she later explained. “You find a way to attain what goal people want to accomplish,” she said. “Instead of saying no, let’s get creative and find a way to accomplish what you need.”

While Barb’s last day as ECRL’s lead administrator is fast approaching, she is not viewing retirement in the traditional way. “It’s a passage to the next chapter, a transition to the next phase in service to the community,” she said. Barb and husband Ron are moving back home to Eau Claire, Wisconsin, where family and a new home await.

A  retirement celebration will be held on Friday, March 31 from 1-4:00 at the ECRL Headquarters in Cambridge.  All are welcome to attend.