Rochester Public Library’s BookBike is being recognized as one of Minnesota’s most innovative local government projects.

Each year, the Humphrey School of Public Affairs recognizes cities, counties and schools for redesigning how they do business through new initiatives and projects. The BookBike was the overall winner in the City Category, earning the library a $5,000 grant.

The BookBike, a little library on wheels, was pulled by library staff on bicycles to locations within a one-mile radius of the downtown library April through September. The BookBike offered library books for check-out, library cards, program information, assistance with digital materials, bike trail maps and fun incentives to visitors. “The BookBike program saw great success this summer,” says Head of Youth Services and BookBike Project Director, Heather Acerro. “We reached over 5,500 community members and visited over 100 sites.”

According to Jay Kiedrowski, senior fellow at the Humphrey School’s Public and Nonprofit Leadership Center, “These awards are helping to raise the bar for delivering excellent government services, and that’s very exciting.” The awards are organized in partnership with the Bush Foundation and co-sponsored by the League of Minnesota Cities, the Association of Minnesota Counties, MN Association of Townships, and the Minnesota School Board Association. “Every year, we see more and more creative ways that governments are figuring out how to save money but still deliver the same high quality of services,” says Kiedrowski.

Rochester Public Library’s BookBike is the first bicycle-powered library in Minnesota. The BookBike project was funded in part with money from Minnesota’s Arts and Cultural Heritage Fund, through a Community Collaboration grant from Southeastern Libraries Cooperating (SELCO) in late 2014. 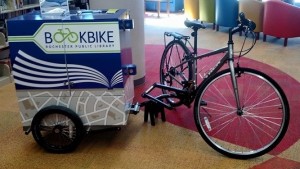 Rochester Public Library announces the launch of the BookBike outreach program. RPL’s BookBike, a little library on wheels, will visit locations within a one-mile radius of the downtown library this spring, summer and fall. Pulled by library staff on bicycles along nearby bike paths and lanes, RPL’s BookBike will offer library books, library cards, program information, assistance with digital materials, bike trail maps and fun incentives for kids.

Families and kids of all ages can “Meet the BookBike” in the Rochester Public Library auditorium on Thursday, April 2nd Saturday, May 2nd at 10:30am. Programming partners, We Bike Rochester and Olmsted County Public Health, will deliver special bicycle safety programs and fun bike activities on both days.

Visit the BookBike at many area locations to get a library card, check out some “wheelie” good books or just to say, “Hey, nice bike!”.

Check online for the BookBike schedule

The BookBike was funded in part with money from Minnesota’s Arts and Cultural Heritage Fund, through a Community Collaboration grant from SELCO for Library Legacy activities.