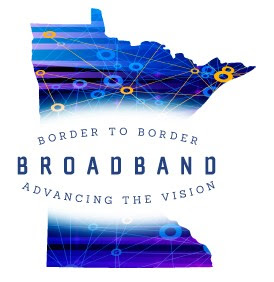 “Everyone in Minnesota will be able to use convenient, affordable world-class broadband networks that enable us to survive and thrive in our communities and across the globe.”

The vision created at last year’s Border to Border Broadband conference has been endorsed by nearly 100 organizations and units of government around the state. This work is the inspiration for this year’s conference theme, Advancing the Vision.

Plan to gather on September 13-14, at the iconic Greysolon Ballroom in Duluth to connect with others, and to hear first-hand about the great work being done across the state to advance the vision.

The conference will kick-off with a reception, dinner and program on Tuesday, September 13. On Wednesday, individuals involved in a number of the state-funded broadband infrastructure projects will give updates. Paul Bunyan Communication’s CEO Gary Johnson will close the conference with his reflections on what gigabyte means for communities, including rural communities.

Border to Border Broadband: Advancing the Vision is sponsored by Blandin Foundation with support from DEED’s Office of Broadband Development. It is an opportunity to connect and reconnect with others working for a future in which everyone in Minnesota will be able to use convenient, affordable world-class broadband networks that enable us to survive and thrive in our communities and across the globe.

Vision
Everyone in Minnesota will be able to use convenient, affordable world-class broadband networks that enable us to survive and thrive in our communities and across the globe.

By adding their names to the Minnesota Broadband Vision, regional library boards are showing their support for a future in which residents of all generations and backgrounds will have access to affordable, high-quality broadband. Included on the growing list:

Only in its third day, the East Central Regional Library (ECRL) broadband support campaign has solicited some persuasive stories.  Consider this comment from a Princeton resident:

I moved from one residence within ECRL region to another in the region within the last 3 years. I was able to get DSL at the former residence. I now live even closer to a major highway but internet service is not available at my “new” location except by paying for a hotspot through Verizon that is VERY expensive and the cost is based on usage so I have to very carefully choose what I can do online, limit my downloads, etc., so as not to go over my usage limit. When I moved, I was told Centurylink/Qwest has the “rights” to where I now live so I checked first with them about getting internet service since they are my landline telephone provider. I was told that, yes, they “own the rights” to my address but have no idea when or if they will provide internet service there. I am in a residential area, 3 miles from town and next to a major state road so I most certainly ought to be able to have inexpensive and unlimited internet access.

For more information on the ECRL broadband support efforts

East Central Regional Library (ECRL) is in the midst of a marketing campaign to generate support for the Minnesota Broadband Vision and solicit personal stories.  This follows the February 2016 ECRL board meeting, when the board endorsed a resolution supporting the Minnesota Broadband Vision stating that “everyone in Minnesota will be able to use convenient, affordable, world-class broadband networks that enable us to survive and thrive in our communities and across the globe.”

Components shared with each of the 14 ECRL locations include:

The ECRL broadband publicity efforts will continue through March 26.

The Southeastern Libraries Cooperating (SELCO) Board of Directors joins the ALS, ECRL, NWRL, and PLS regional library boards in support of the Minnesota Broadband Vision.  The SELCO resolution stresses the broad array of vital library services which depend on broadband or high speed Internet.  The resolution urges Governor Dayton and the members of the Minnesota Legislature to provide leadership, resources and the necessary legal framework to make this vision a reality.

Libraries around the state are encouraged to seek support from local governing authorities, community groups, and individuals who believe that Internet access is an equity issue for all Minnesotans.

The Arrowhead Library System (ALS) Board of Directors adopted a resolution encouraging the Minnesota Legislature and Governor Dayton to provide sufficient resources for border to border broadband.

Libraries around the state are encouraged to seek support from local governing authorities.

High speed internet service is essential to individuals, communities and the libraries that serve local residents.  The regional library systems are seeking library board support for the Minnesota Broadband Vision and the East Central Regional Library (ECRL) is leading library efforts.  ECRL is the first regional board to pass a supporting resolution.  In her role as the 2016 Legislative Chair, ECRL Director, Barbara Misselt, sought endorsement from both the Minnesota Library Association (MLA) Legislative Committee and the MLA Board.

Members of the Minnesota Library Association (MLA) Legislative Committee endorse the Minnesota Broadband Vision.  This library specific resolution will be recommended for adoption by the MLA Board later this month.  Libraries around the state are encouraged to seek support from local governing authorities.

Resolution by the MLA Legislative Committee

Everyone in Minnesota will be able to use convenient, affordable world-class broadband networks that enable us to survive and thrive in our communities and across the globe.

Cities, counties, community organizations, and regional libraries  are actively showing support by endorsing the vision.  During the coming months, CRPLSA members will seek approval from their regional library boards. The Bladin Foundation has crafted a draft resolution to aid in generating support.  Follow the Broadband Vision Facebook page to keep up with endorsements.

The following information was shared via email with the library community by Elaine Keefe, Capitol Hill Associates, in her role as MLA-ITEM lobbyist.

House Legacy Bill: Yesterday the House Legacy Committee competed work on its omnibus bill and passed it out of committee. Rep. Dean Urdahl, chair of the committee, made it very clear in his opening remarks that no group was entitled to any particular amount of Legacy funding, regardless of what they had received in the past. As such, there is no such thing as a “cut” in Legacy funds. We all start out at zero for the biennium, and the amounts we receive will fluctuate – sometimes they will be higher and sometimes they will be lower than in the past. He said that some groups needed an “attitude adjustment.”

I spoke with Rep. Urdahl today and he expressed annoyance at the number of e-mails he had received about the level of library funding in the bill. I assured him that his message was loud and clear and that I would convey it to the library community. I also thanked him for including funding for libraries in his bill, acknowledging that he has long been a strong library supporter.

So, thank you to those of you who contacted your legislators and members of the House Legacy Committee. However, we need to stop complaining about the level of funding provided in the House Legacy bill.

Broadband: I reported last Thursday that the House was providing no new funding for broadband grants, while the Senate had $17 million in its budget and the Governor had $30 million in his budget proposal. However, on Friday when the omnibus jobs and energy bill was heard in the House Ways and Means Committee, $8 million was added for broadband grants. Funding for the Office of Broadband, which had been eliminated in the bill, was partially restored.

House Omnibus Tax Bill: Today the House Tax Committee passed its omnibus tax bill. Yesterday the committee took public testimony. The bill makes deep cuts in local government aid for Minneapolis, St. Paul and Duluth, but not for any other cities. Among the witnesses in opposition to these cuts were Kit Hadley, director of the St. Paul Public Library, and two branch managers. They spoke very eloquently about the impact these cuts would have on library services in St. Paul.

Other provisions of interest in the bill are as follows:

A sales tax exemption for building materials purchased by a contractor under a lump sum contract for buildings used by local governments. This was strongly supported by cities and counties.

A Property Tax Payers’ Empowerment Act, which allows a reverse referendum if a city or county increases its property tax levy over the previous year. The referendum is triggered if a petition signed by 10% of the voters in the last general election is filed by June 30. The referendum must be held on the first Tuesday after the first Monday in November. This was opposed by cities and counties.

Data Practices Training for Local Units of Government: The Senate omnibus state government funding bill passed on the Senate floor yesterday. It includes $100,000 in each year of the biennium for the Department of Administration’s Information and Policy Analysis Division, commonly known as IPAD, to conduct training for local units of government on data practices laws. This was initiated by the League of Minnesota Cities. The funding is not included in the House omnibus state government funding bill.

CRPLSA director, Peg Werner, VLS, was instrumental in preparing the Broadband and Telecommunications Access for Schools and Libraries legislative talking points. The focus of this legislative initiative supports an increase of $6 million for the school Telecommunications Equity Aid (TEA) program, as well as ongoing funding of the current $2.3 million appropriation for  Regional Library Telecommunications Aid (RLTA) to ensure equitable access to broadband and Internet services. The talking points outline 10 specific services affected by the availability and the level of bandwidth, ranging from technology support for displaced workers to Internet-based audio and videoconferencing technology is used to connect educators, librarians, and peers across the globe.

More information about CRPLSA legislative initiatives may be found on the Advocacy page.