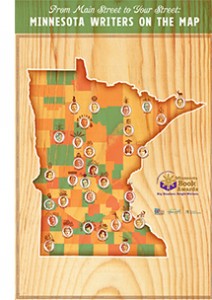 The Minnesota Book Awards is very pleased to announce a new, online version of the popular Minnesota Writers Map which was first launched in the spring of 2013. Now featuring interactive information on each of the 112 authors listed, the online project is intended to be an ever-expanding effort. In the coming months, additional authors will be added, with more audio and video resources continually being incorporated to make it a truly living and breathing representation of the state’s literary legacy. 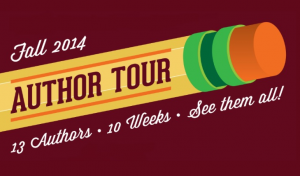 Fall colors are appearing as are Minnesota Book Award authors in libraries throughout the southeast.  Once again, SELCO will host a traveling author tour featuring 13 authors visiting 23 locations during 10 weeks from September through November.  Check the Author Tour postcard for dates, times and locations.

The Friends of the Saint Paul Public Library is pleased to announce the winners of the 26th annual Minnesota Book Awards (MNBA). And the MNBA winners are —

The Hognander Minnesota History Award recognizes the author of the most outstanding scholarly work related to Minnesota history published during the preceding two years.  As part of the 2014 MNBA festivities Gwen Westerman and Bruce White received this prestigious award for Mni Sota Makoce: The Land of the Dakota – published by Minnesota Historical Society Press.

Books written by a Minnesotan and first published in 2013 were eligible for the 26th annual Minnesota Book Awards. 242 books were nominated for awards this year, and 32 books were selected as finalists. The winners were chosen by panels of judges from the list of finalists. Nominations for next year’s Awards will open in August, 2014. More details about the winners, the finalists, and the  26th annual gala attended by a record breaking 960 people can be found on The Friends of the St Paul Public Library website.