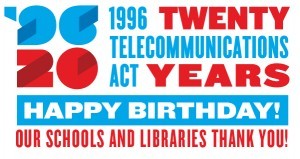 CRPLSA director, Peg Werner, VLS, was instrumental in preparing the Broadband and Telecommunications Access for Schools and Libraries legislative talking points. The focus of this legislative initiative supports an increase of $6 million for the school Telecommunications Equity Aid (TEA) program, as well as ongoing funding of the current $2.3 million appropriation for  Regional Library Telecommunications Aid (RLTA) to ensure equitable access to broadband and Internet services. The talking points outline 10 specific services affected by the availability and the level of bandwidth, ranging from technology support for displaced workers to Internet-based audio and videoconferencing technology is used to connect educators, librarians, and peers across the globe.

More information about CRPLSA legislative initiatives may be found on the Advocacy page.